Early in my childhood I became fascinated by the world of Nature. 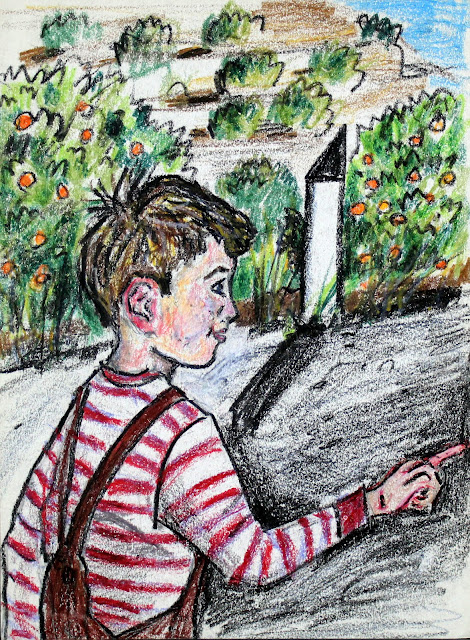 I recall walking out of the yard, and on to the road overlooking the city far below. I was barely four years old, then.
I saw a milkweed plant on the roadside.  Its delicate pink and beige flowers, were alive with  jewel-like metallic green beetles, and orange milkweed bugs. I was fascinated, and so I picked some, and brought it home to my mother. 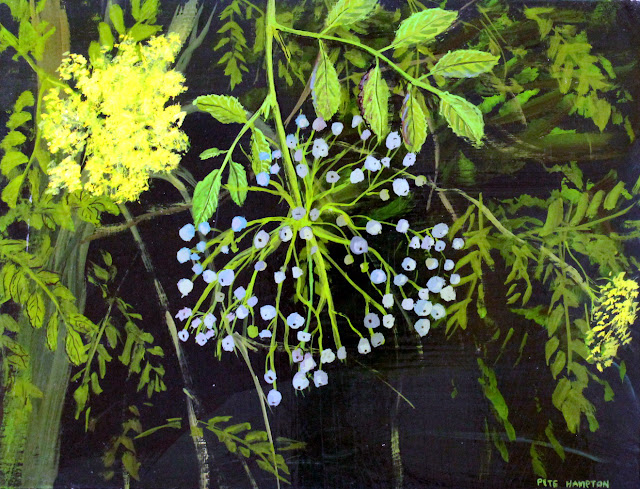 But Mother said it stunk, and forced me to dispose of it. I didn’t understand why she didn’t like my bouquet, so I brought home some more. Once again, she angrily threw it out.
“Don’t you bring that smelly skunkweed home or run away again! Do you hear? It might be poisonous!” And she locked me in the back yard. 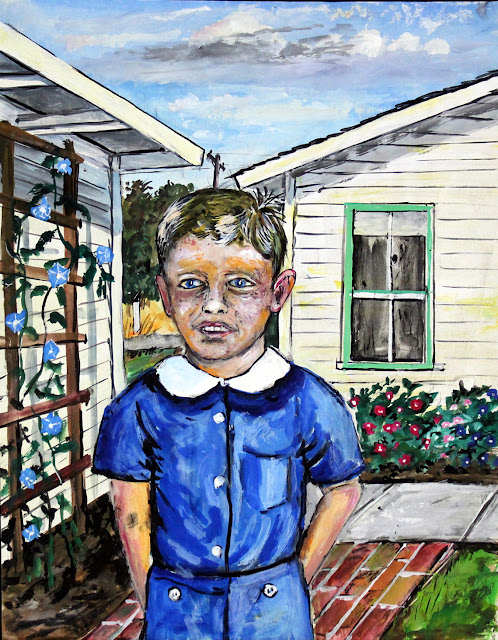 There was only one other house on the road. The boys who lived there were a little older than I, but they wouldn’t play with me because they didn’t understand my serious interest in nature. 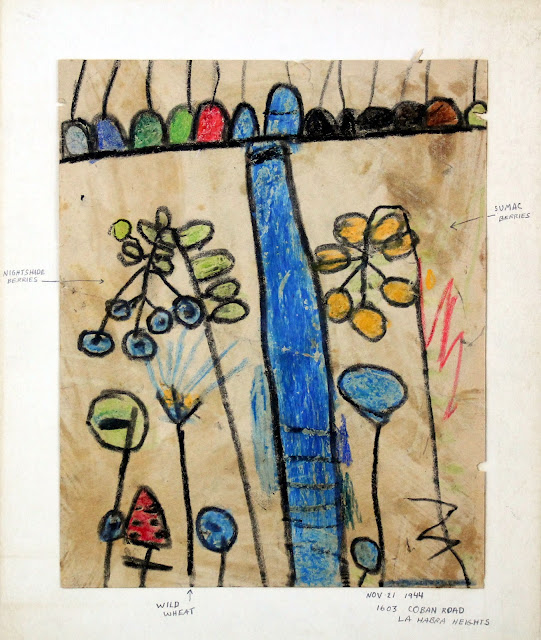 Often they shoved me around, which made me very lonely.
So I took even more interest in nature, and like other boys, I created  strange creatures in my imagination, like heroes and villains of the wild.
I called these bird-like creatures the  Telephonepolies. When I heard an exciting piece of a symphony on the radio it would turn my imagination loose, and I would feel the great power of these destructive creatures. 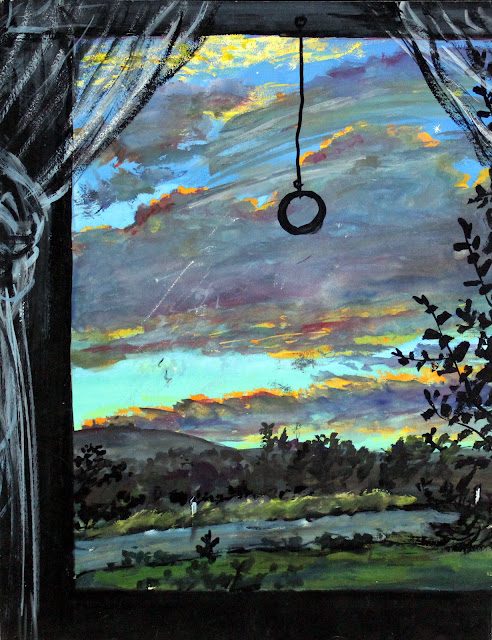 In the Anise forests there were Little Gorder Telephonepolies that would sting you with their three stingers. 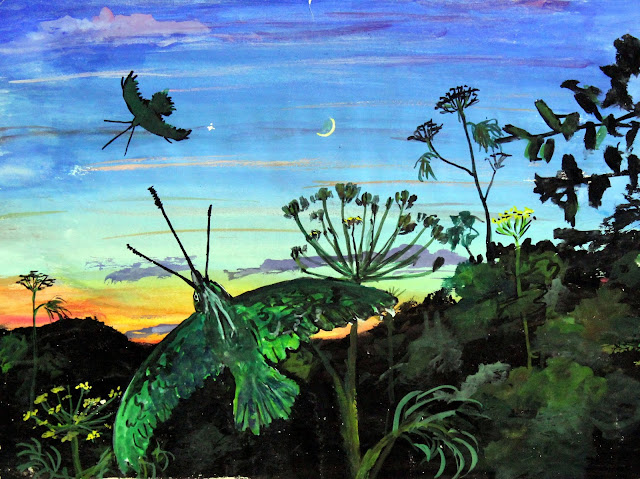 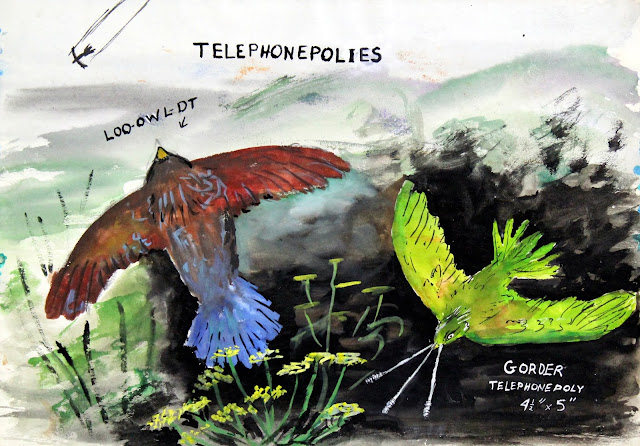 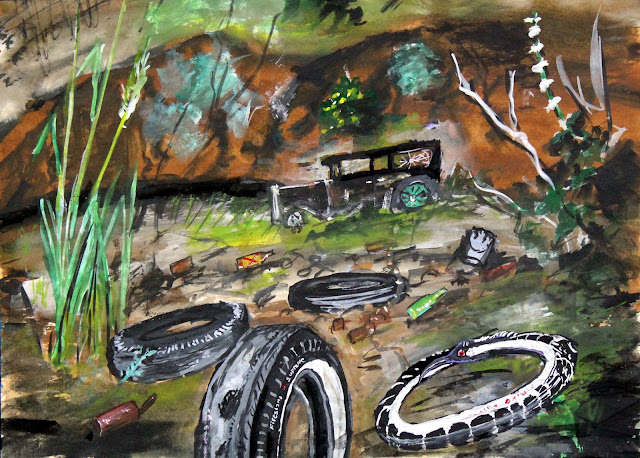 While asleep in the daytime, it was camouflaged to resemble an old tire. 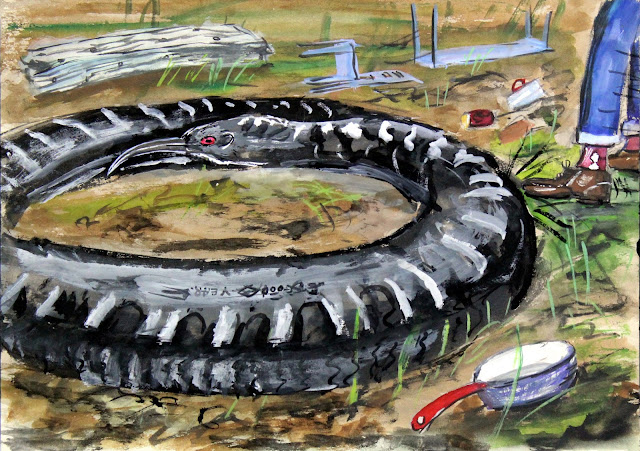 It would curl up into a hoop and go rolling down a hill at high speed and mow you down! 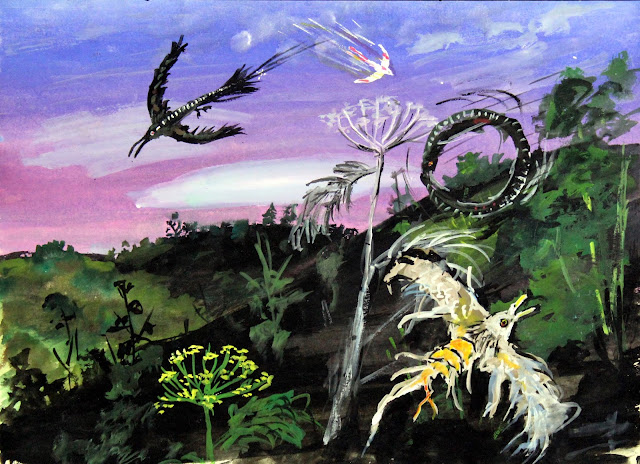 A Sunwing glides into the avocado forest. 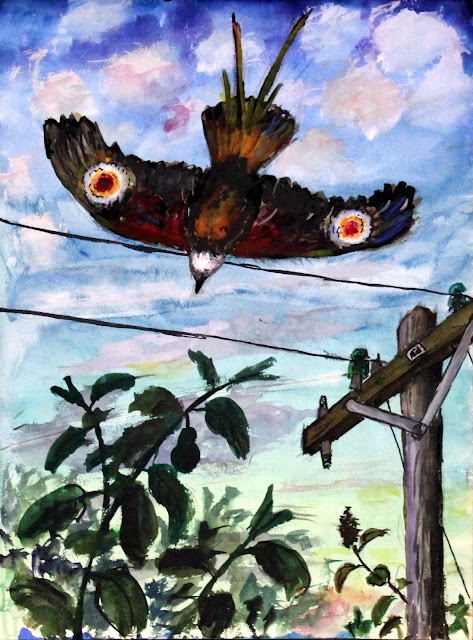 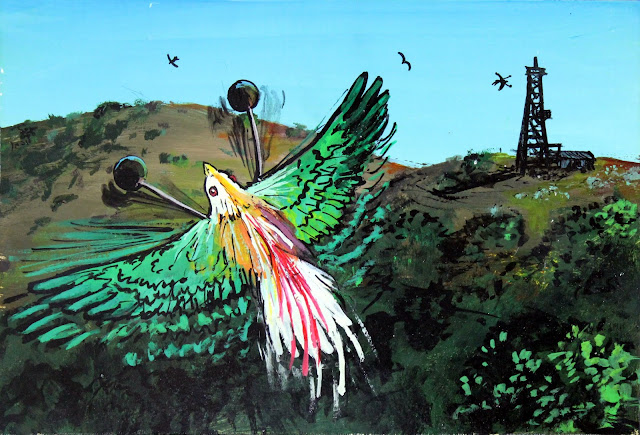 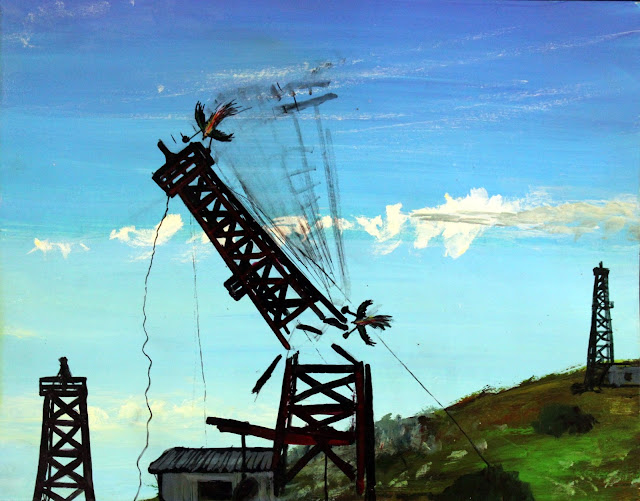 Fire Flarers attack a lone house in the hills. 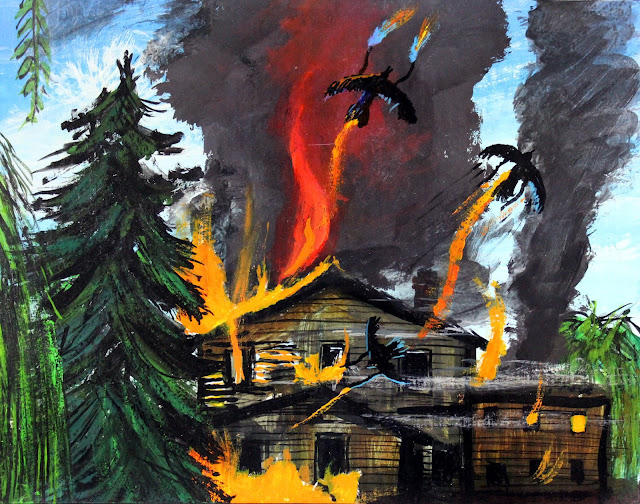 There were clashes between these great creatures over the lost avocado forests. I imagined them fighting terrible battles high over the woods. 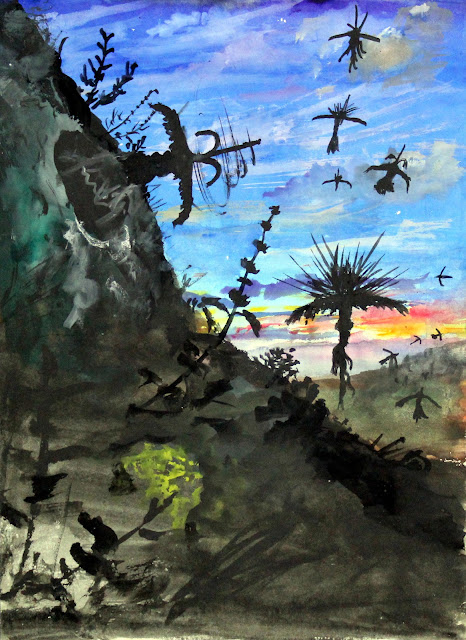 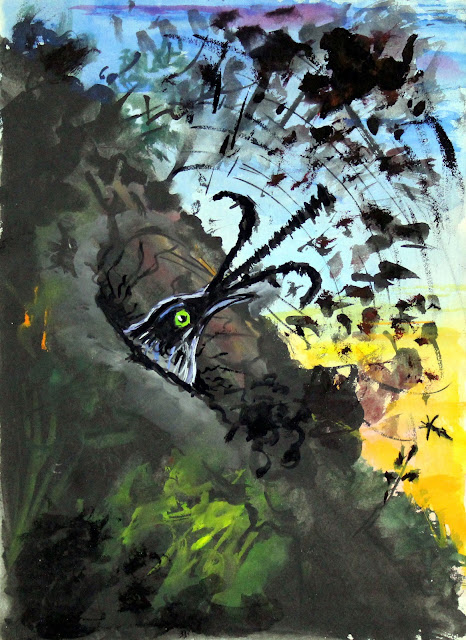 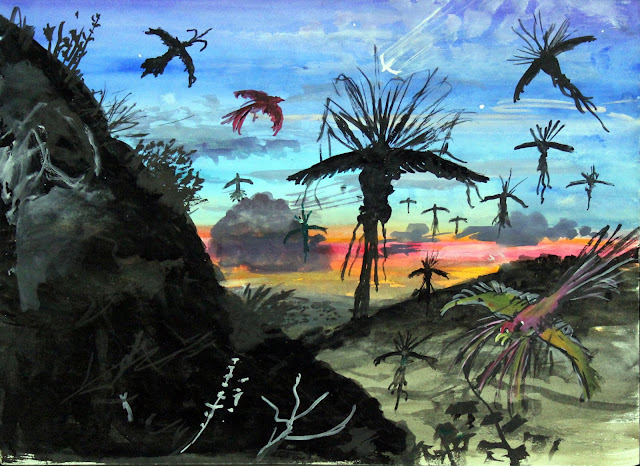 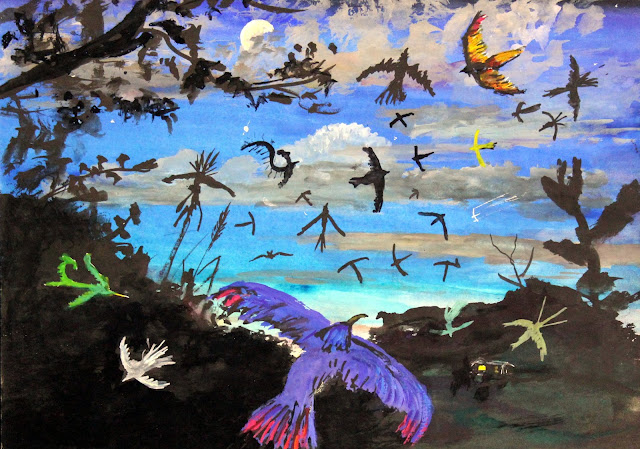 A  Cerrada flies over the night forest as a Fire Flarer sets a small fire. 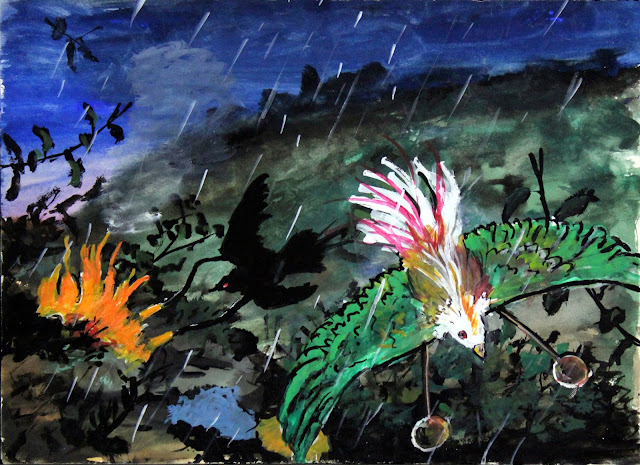 Cerrada and a Fire Flarer in a violent fight. Raging fire sweeps the canyon wall. 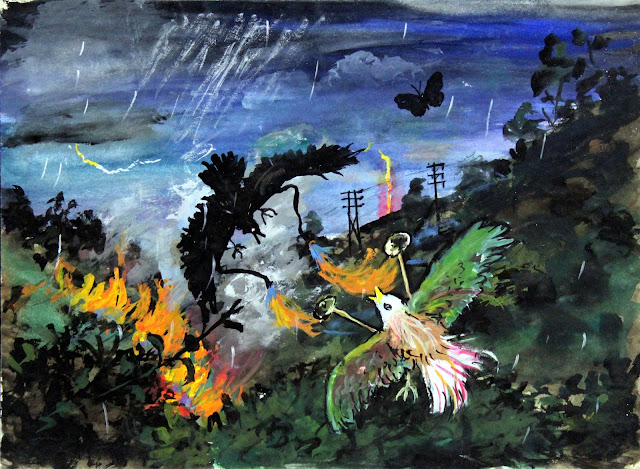 But one of the great Dark Age storms extinguishes the flames. 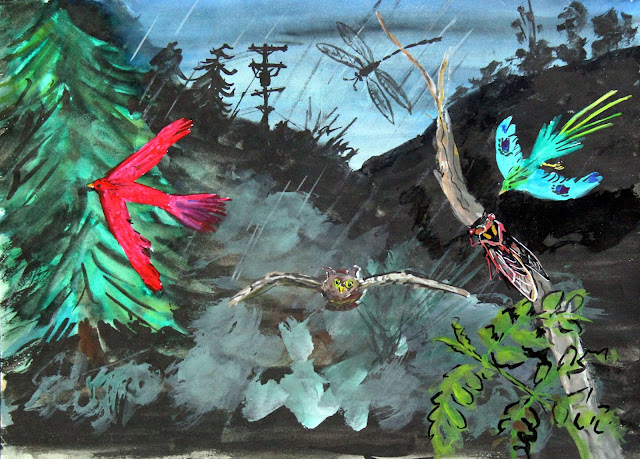 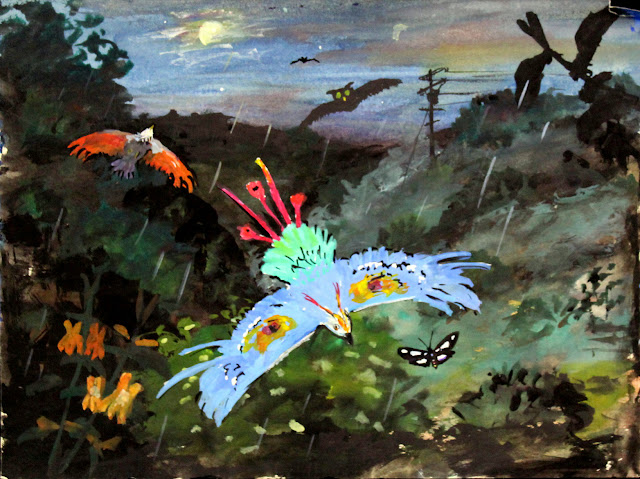